The second week of Lost Inverlael excavations was conducted in April 2022. During the week we focused on two main areas. One, a very large circular structure, and the second, a building with narrow trench running up the side. The theory we had going into these two weeks was that we are looking at a large corn drying kiln and a mill with attached lade. The objective of that week of digging was to positively identify the structures and determine some form of date range for the occupation era of the site.

We put in two trenches one that took up 1/2 of the suspected kiln, and another 17 metre long trench that cut through the lade and three walls of an L shaped mill, as we understood it. On excavation and to our frustration one of the walls turned out to be a significant amount of tumble, without any definition or pattern, which meant we could not confidently say we had a third wall.

This made us rethink our interpretation and came up with two additional theories. One, that this was in fact the Miller’s residence and not the mill itself, or secondly that the L shaped building went in the opposite direction, and due to this we had placed our trench in the wrong place. We hope with further analysis of the finds and samples we may be able to understand the site a bit better and make a judgement on the use of the building closer to the end of the year. 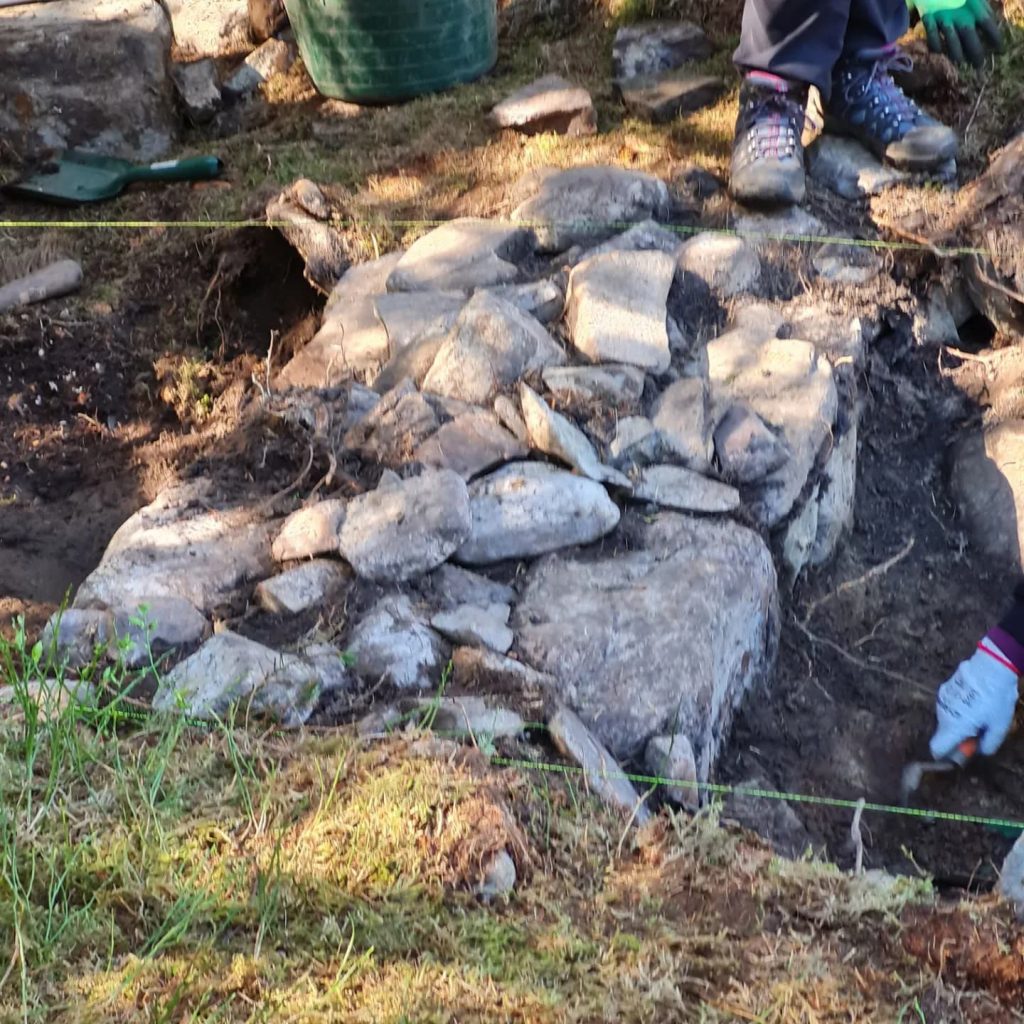 We had a bit more success in dating the occupation due to the quality of the finds that came out of the mill trench. This included a blue glass bead, shards of ceramic, small thin pieces of glass, musket balls, pistol balls, and a beautiful Irish King William and Queen Mary half penny dated 1693. This has helped us get an estimated range of the late 17th and early 18th century.

Some finds like the blue glass bead are more difficult to pin down with a date. Blue glass beads have been around for thousands of years and to be reasonably confident on it’s age, an analysis will need to be done on the glass itself.

This time we had the Gaelic Primary 4, 5, 6 & 7 from Ullapool High come out to visit the site and get a shot of digging, drawing and taking measurements with the dumpy! It was great to see so many happy and engaged faces, connecting with their culture and heritage. The BBC Alba, An Là came out and spoke to everyone including the kids for their evening brodcast on the 21st of April. We would also like to say a big Thank You to Ruairidh at Iomairt Ghàidhlig Rois, who helped out so much to coninue the kids Gàidhlig learning.